The U.S. PGA Championship starts tomorrow night (Australian time) and is an event that provides punters with the best bet of the week in my view.

Jason Day has been in great form this year and is a proven Major performer. He is definitely due a win in a Major but if he doesn’t win he has strong form for placing in the Top 5.  Indeed in his last 11 Major starts he has four top 5 finishes.

He is presently paying $3.20 to finish in the top 5 in UBet which to me is excellent value.

Bet: Jason Day to finish in the Top 5 of the PGA Championship.

Every golfer has wanted to do this: just throw the club in the water and move on … https://vine.co/v/OEZlEbAMrZb

Now the best golfer in the world is in that same club.  Wonder what Nike think about this on course review of the new Vapor irons?

I was fortunate enough to play in a charity ambrose tournament at Brookwater Golf Course yesterday. It would be fair to say that for the first 13 or so holes I can not remember ever hitting the golf ball better.

Now I know that is probably hyperbole and as a card carrying hacker that probably does not mean much so some context is needed:

1. Brookwater is widely regarded as the hardest golf course in Queensland.
2. Of late I have breaking in a new set of irons and have not been happy with how I have been playing.
3. Whilst I am probably a 16 handicapper when playing regularly until 2 weeks ago I had not really been playing much in part due to a troublesome left knee.

Every hacker level golfer will be able to impart (or impose) on you a story of the golf hole that keeps them coming back to the game and, indeed, inspires them to play more. I have had a few over the years but the 1st hole at Brookwater yesterday, it must now be declared, will take some serious beating for me. Again for context: by serious beating I mean a hole in one.

So: the 1st at Brookwater is a 350ish metre par 4 with a dog leg left. Here is a diagram and picture of the hole from the course website: 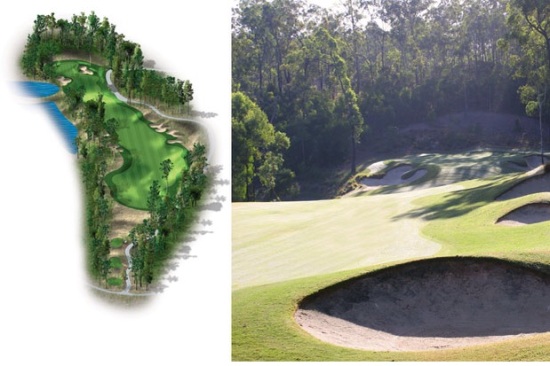 The course website goes on to describe the hole thusly:

This medium length par 4 flows into a valley and features a gentle dog leg to the left and is the first of 5 stunning opening holes.

A good tee shot to the centre-right of this fairway, which slopes from the right towards 2 deep bunkers and a creek, will leave you with a medium length approach to the green. The two-tiered green is elevated and well guarded by bunkers on both sides.

Pro’s Tip: Long is better than short on your approach shot, as there is a deep valley short of the green which will leave a tricky pitch.

From the tee box this is an imposing hole with a small landing area for drives. Fortunately this hole was actually our 6th of the day having started our round on the 13th so I was a bit warmed up rather than playing this hole cold.

Whilst I concede that an ambrose golf day is begat with less pressure than one would normally have on oneself this hole is the best golf hole I have ever played and it went down like this:

The Drive: I hit first off the tee for our group and hit 3 wood off the tee because I have been spraying my Driver all over the place. Being a smartarse I said to one of my playing partners that I intended to aim my 3 wood at one of the left hand side sand traps and let my fade take the ball to middle of the fairway. Frankly I didn’t have a clue if that is what the ball would do off the club but that is what it did. Straight off the club the playing partner I had that exchange with uttered the words “you complete bullshit artist” so I knew it was good.

The Approach: From the middle of the fairway we measured the approach shot at 150 metres to the middle of the green. The flag was right in the front of the green which had the risk of the run off into the gully. As is normal with ambrose play my playing partners went before me. Unfortunately by the time my shot came around we did not have a ball on the green. I hit an 8 iron in and, again bizarrely, the minute I hit it I knew it was good. The ball landed 2 feet from the hole and stopped next to its pitch mark.

The Putt: If there is a major weakness in my game it is with the putter. As a cricketer my favourite shot was the cover drive and I still to this day push the ball with the putter like I am hitting the ball between cover and mid off. So I stood over my, suddenly, birdie putt with zero confidence. This time I went first and as I stood over the putt all I could think of was “don’t cover drive it”. I thought it was a straight putt and hit it straight and bugger me if it didn’t go in.

I know it was an ambrose game and I know I wasn’t off the back tees but if anyone had ever told me I would have a birdie on the card at the hardest course I have ever played I would have told them they need to cut down on what they are smoking.

I know this is a selfishly indulgent post. However I have written it because this type of hole is exactly what I love about golf. There are moments in this game where you can replicate what the best in the game do every week and sometimes on most holes in a round, using almost the same equipment as them with the same variables of weather. There aren’t many games in sport where you can say you can do that.

My round yesterday at Brookwater has inspired me to play more and to invest in my game a bit with some lessons. I want to replicate the felling of that birdie soon!

Tonight, Australian time, my favourite golf tournament of the year kicks off at Royal Liverpool Golf Club: the Open Championship.

All of that said, having run the ruler over the combatants for year’s Open, there is one name that I keep coming back to and that is Martin Kaymer. No player in 2014 has been in better form than the man from Dusseldorf. At $17 he is well worth a wager, particularly in the market to make the top 10.

At the other end of the spectrum, one player I will be laying this week is Graeme McDowell. “GMac” did win on the European tour last month but that aside has not been in form for a while. Also he possesses an ordinary record in majors since his 5th at the Open in 2012 having missed the cut in three of the seven majors since then and never being in the top 10. $26 is unders for mine.

One of the things I love about the Open is that generally there is a “roughie” that pops up on the leaderboard. For me, that man this year is Jamie Donaldson. He is ultra consistent on the European tour and at $71 will be getting a nibble of cash from me.

1. Please gamble responsibly.
2. Whilst all care is taken with these tips no responsibility vests for losses incurred.

I played golf with clients today around one of the two entirely public courses in Brisbane: St Lucia Links. I will see right off the bat that the golf course was in good condition, the pace of play was not slow and we had a great afternoon.

A couple of things though stood out during the round that, again at this public course, are not only total against golfing etiquette but again lead to a discussion in our playing group as to whether we will return to St Lucia to play.

Yet again today I witnessed groups of more than four players playing together.  Indeed we witnessed during the course of our round two groups of 8 players playing together.  That is right: two groups of 8 players.  Now I get that it was Friday afternoon and these guys had probably taken an early mark at the end of a long week but it really is just rude, let alone against the etiquette of golf, to delay the play by playing this way.

Also today, and again not for the first time at St Lucia, I hit a ball into a bunker and it rested in the heart of a large footprint. How hard can it be to rake the bunker? That is just standard golf etiquette.

I concede that I am taking my chances by playing at a publicly accessible course and that the conduct outlined above would simple not be accepted at a closed membership course.  Still I would have thought that if you are intending to have a round of golf you would at least know the general etiquette of the game.

I would hate to get to a point where before a round of golf the players, particularly on a public course, need to receive a short lesson in etiquette before they go out for a round but I suspect that, at least at St Lucia Golf Links we are not far off.

I will be back to St Lucia: I enjoy the course.  That said I think I will be choosing a tee time that is before 7am in the morning.  I base this on the theory that only golfers who follow the rules will be playing at said time.

If you are reading this as you scout for a place to play golf in Brisbane I would suggest that if you looking for round where the etiquette of the game is followed then St Lucia Golf Links should probably be given a miss by you.

I am not going to lie: I was a bit worried about taking the new irons out without having had more practice with them and on such a windy day. That said: the positive impression created by that first time at the driving range was only enhanced by taking them out on the course for the first time.

Here are some “Part 2” impressions:

2. These clubs are easy to hit: I had no trouble at all, including from some tough lies, getting these balls in the air. Once in the air they seem to fly so far. For example on the 15th hole my 5 wood from the tee had ended up hugging the tree line. Normally I would bail out on the second shot and lay up as the last tree in the tree line is a large gum tree I have never been able to get over. Today, feeling confident, I hit an easy 5 iron (again) at the tree from 173 metres to the pin. It flew over the tree and landed just short. I have never done that before.

3. They just feel great in the hand: I know I have been playing irons that are 20 years old so my view may be a little antiquated but I have never swung a club that felt so balanced in my hand.

All in all, and I know in biased because I am playing with them, I can not fault these clubs. If you are looking for a game improvement iron or just looking for a change give these clubs a try.

Shumpty in 140 characters or less