I am a Canberra Raiders fan of some 28 years standing and, if you follow my twitter feed, you will know my absolute disgust with the way this mighty club is being treated by the funder of the competition: Channel 9. For those who have missed it, the Canberra Raiders will be shown once this year on Free to Air Television by Channel 9. That is right: from 22 possible games this season the Raiders will be shown in 4.17% of those games on Channel 9. Now many fans out there are probably thinking: “who cares, the Raiders are crap anyway!” but that thinking belies the fact that with 6 rounds to go the Raiders presently sitting in 7th spot and have a real chance of making the finals.

For those wondering how their team fairs by comparison to the Raiders, the table is instructive: 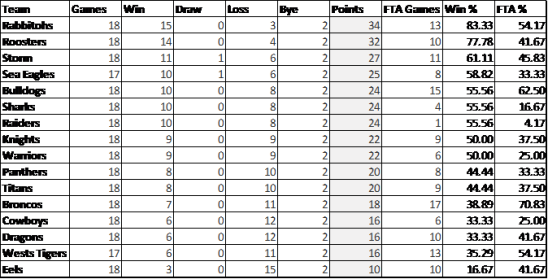 Some very interesting trends flow from the table:

1. The games on Channel 9 that include a team in bottom 3 of the draw (33) account for more games than those of Sea Eagles, Sharks, Raiders and Knights (all of whom are in the top 8) combined.
2. The Eels may, depending on results, end up playing as many games shown on free to air TV as the number of points they win during the course of the season.
3. Statistically, if your team has historically hailed from the Sydney (Rabbitohs, Roosters, Dragons), Western Sydney (Bulldogs, Wests Tigers, Eels) or Brisbane (Broncos) areas you have a statistical probability of seeing your team play 52% of the time on Channel 9 (88 showings out of a possible 168 games) versus a probability of 29% if your team hails from areas outside of those historical geographic locations.

Now, the apologists for Channel 9 will say two things:

1. They have paid for the rights and they can show whomever they wish on their channel; and
2. They chose at the start of the year the teams that they thought would go well this season but they were wrong so stop whingeing.

The first argument shows the difficult conundrum that arises when the influences of commercial imperatives collide with the trusteeship of the game that goes with being the rights holder. I accept that there are commercial benefits to Channel 9 in showing the teams that they are showing however surely that commercial benefit outweighs the importance to the standing of the game and the future of said game that is secured by showing all of the teams that play it rather than just the chosen few that currently get airtime.

The second argument is a fallacy. That is because, whilst the Channel 9 had to set the schedule for games to be televised for the first 20 weeks of the season in October 2012, they have recently, with the knowledge of position of the teams on the ladder and their form had the ability to set the schedule for the last 6 rounds of the competition. It is that setting of the schedule armed with that knowledge that raises the question in the title to this post and the hackles of fans of the Raiders (and some other teams).

For the six games that Channel 9 got to choose who they showed on their station armed with factors such as position on the table and form line this is who they chose:

Can anyone explain to me why Channel 9 would decide to show the bottom dwelling Eels in 4 of 6 games on their channel? It just beggars belief that they would chose to show such a team instead of the Raiders who are in the top 8 or the Cronulla Sharks for that matter who are also in the top 8. The Broncos have received six games out of six on free to air television despite their woeful form and position on the ladder but that is understandable given the parlous state of the Queensland teams in this competition at the moment and the fact that Channel 9 have to show something watchable for Queensland fans (they can not all be fans of their original team still like me).

Some will argue that the Eels are being shown on Channel 9 because they are playing teams from the top 8 and thus Channel 9 showing the top teams despite their lowly position. That argument does not wash though when you consider the road to the finals that the Raiders face. Again, in case you missed it, the Raiders will play the Storm, Roosters, Sea Eagles and Bulldogs in the space of four consecutive weeks.

I know I am a strident Raiders fan, but can any fair minded NRL fan like me in the eye and say that the allocation of the games by Channel 9 on free to air is good for the game or, even, fair?

So with all of the facts above, I will finish by posing the question in the title again: Channel 9 … why do you refuse to play the Canberra Raiders on your channel? I, as a fan of the Raiders and the game, would love to know … and I am sure many others would like to know too!

Shumpty in 140 characters or less